Onetastic update 5.6.0 introduces Macro Menus which allows macros to present a drop-down menu with common actions that makes it much easier and faster to achieve what you need. Many macros display dialog boxes to ask for options or settings. For instance, Insert Monthly Calendar macro asks about which month/year you want to insert a calendar for. Most of the time users will want to insert the current month or the next month's calendar. This macro can now display actions for inserting the calendar for one of the following three months in the menu: 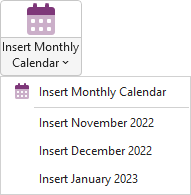 These options will automatically update themselves with the current month and the following two months. The ribbon button for macros that have a menu is a split button. The top portion of the button still executes the macro as before, while the bottom portion will open the menu for quick actions.

If you are a macro developer, you can add menu to your macros by use of a user defined Setup function, which defines a set of menu items, each of which pass an argument to the main macro function to perform a specific task. Additional debugging and authoring tools are available in Macro Editor for editing menu items. More information can be found in the documentation.

You can use your imagination to add various menu items to macros. A macro can display recently picked options or commonly used actions. It can even provide interface for users to customize the menu to their liking. This can also be used to combine previously separate macros into one. For example, No Spell Check macro now has an option in its menu to revert to regular spell checking for the selected text, which was previously provided as a separate macro.

More macros will be updated with menus with quick actions in the upcoming days. These quick actions require a Onetastic Pro license.

In addition to menus, this update adds two new controls to be used in macro dialog boxes:

They will allow macros to ask for a date, time or a font. An example can be found at Daily Planner Page macro: